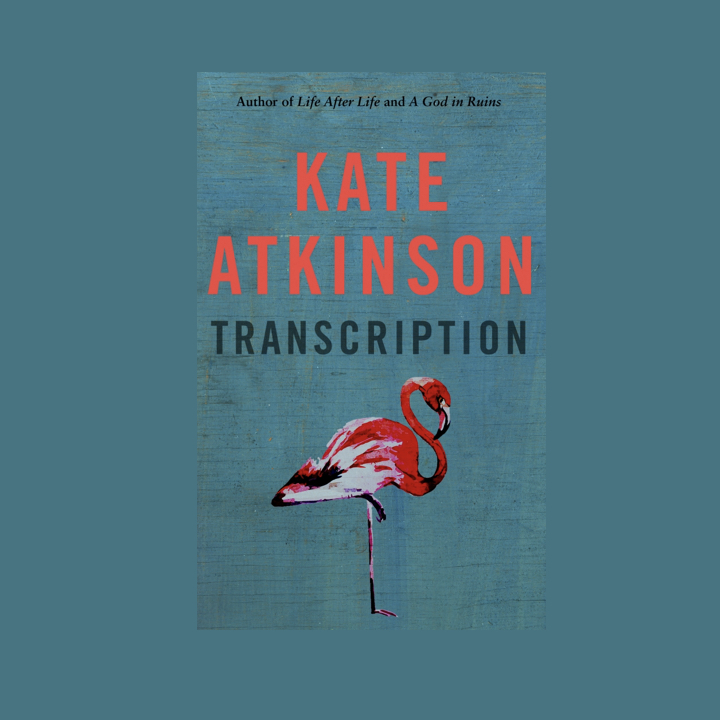 *Just a gentle note, this review may contain spoilers that you might want to avoid*

I’ve never read anything from Kate Atkinson before. I’ve heard of the name but never got round to reading a novel from her. But as I said in my review for Ladder To The Sky, since doing this blog and reviewing books, I’ve become part of the book community and have discovered authors – from debut authors to established household names. And, of course, Kate Atkinson is an established household name. Her novels have won prize after prize with heaps of praise for her too. From what I’ve seen on social media, she’s the author that you like but also your mother, your grandmother and even your next door neighbour. She’s an author that’s looked in a high regard. And for good reason, too.

Transcription is Atkinson’s latest novel and my first. So, firstly, what’s it all about? Here’s the synopsis:

In 1940, eighteen-year old Juliet Armstrong is reluctantly recruited into the world of espionage. Sent to an obscure department of MI5 tasked with monitoring the comings and goings of British Fascist sympathisers, she discovers the work to be by turns both tedious and terrifying. But after the war has ended, she presumes the events of those years have been relegated to the past for ever.

Ten years later, now a producer at the BBC, Juliet is unexpectedly confronted by figures from her past. A different war is being fought now, on a different battleground, but Juliet finds herself once more under threat. A bill of reckoning is due, and she finally begins to realize that there is no action without consequence.

Transcription is a work of rare depth and texture, a bravura modern novel of extraordinary power, wit and empathy. It is a triumphant work of fiction from one of this country’s most exceptional writers.

Sounds brilliant, right? And, it is. Since not having read anything from Atkinson before, I was anxious of not liking it. That I wouldn’t ‘get’ her style of writing or even like the characters or story. I’m not a big reader of historical fiction to be honest. I’ve studied it and enjoyed but when it comes to books, I’m all for a contemporary setting. Even though I’m a literature student… but I’m now starting to broaden my horizons so to speak and have started reading more historical fiction, including Transcription. Since I saw a massive buzz on social media for this book with the gorgeous proof copies to the final cover with the proud and beautiful flamingo, I thought I’d take a chance. And it’s a chance I’m glad I took.

Older men of a certain type were drawn to her. They seemed to want to improve her in some way. Juliet was almost thirty and didn’t feel she needed much improvement. The war had seen to that.

I devoured this book. Once I got used to the characters, the story and the MI5 jumble, I fell in love with it. Straight away, I knew I was in safe hands with Atkinson. From the first page, I was hooked and already falling in love with quote after quote. There are some writers that you can imagine them standing over this book with a tweezer, making sure every word fits in the right sentence. And Atkinson does that – no word in this book is wasted – far from it. Atkinson is a wonderful writer. It’s like a comfort blanket – keeping you warm and comforted but still high on the suspense and tension.

Union Jacks draped everywhere. There was no mistaking that she was home. At last. ‘This England,’ she murmered.

I loved the main protagonist, Juliet Armstrong. One, what a beautiful name. And two, what a bloody good character. Juliet is a brilliant character in many ways but for me, I found her to be a strong-willed character that isn’t a character that you might agree with everything she does but at the same time, you are rooting for her. I could tell that Atkinson had a great sense of who Juliet is as a character and really got under Juliet’s skin and had a great joy in writing her. I also loved the supporting characters. Each character had their own distinctive voice and well fleshed out. My favourite being Cyril. Seriously. Adorable. It might seem like there’s a lot of characters to remember but I think that’s not the case overall. With each one having their own voice and fleshed out a lot, they are their own characters. And, of course, in this book, you don’t want to forget about certain characters, do you?

I’ve always wanted to be a spy growing up. I remember having ‘spy equipment’ from Argos for Christmas and thinking I was part of MI5. I think that’s what drew me to the book to be honest. I found it fascinating and was gripped by the entire story of Juliet being an agent. Of course, a big part of the book, well, the entire book, is about the war and Juliet transcribing conversations from a group of British fascist sympathisers. But when the war is over, Juliet starts working for the BBC and thinks the past is in the past. But that’s never going to be the case, is it? I loved Juliet working in the BBC – I’ve always been interested about the BBC as a whole and it was fascinating to see Juliet’s transition from MI5 to the BBC. Something that Atkinson said happened a lot during that time.

Yet suddenly it all seemed like an illusion, a dream that had happened to someone else. What an odd thing existence was.

Overall, I fell in love with this book and it’s wonderful characters and interesting plot. It’s quintessentially British. For my first Atkinson novel, I’m obsessed with her writing. The way she uses words and witty and smart dialogue, I’m jealous. I want to write like Kate Atkinson when I grow up. I had a signed and special edition from Waterstones that had something special with Atkinson giving ten things she has learned from writing. And as an aspiring writer myself, I loved every single word. I could read/listen to her talk about writing all day. If you haven’t listened to it yet, I’d highly recommend listening to Simon Mayo’s Books of the Year podcast when Kate Atkinson is on the show talking about Transcription. It’s a brilliant companion to the book.

I would also just *LOVE* this to be adapted to a BBC drama series. I hope it’s already in the works because it’s something that I need to watch right now. But who would play Juliet?

The difference between presence and absence. Reading and writing. Playing and listening. Living and dying. The world was just an endless dialectic. It was exhausting.

I can’t wait to read the rest of her novels and fall more in love with her writing. Just brilliant. Easily one of my top reads this year. The flamingo will see you now.

Have you read Transcription yet? What did you think? Are you a Kate Atkinson fan? What’s your favourite book from her? Let me know in the comments!